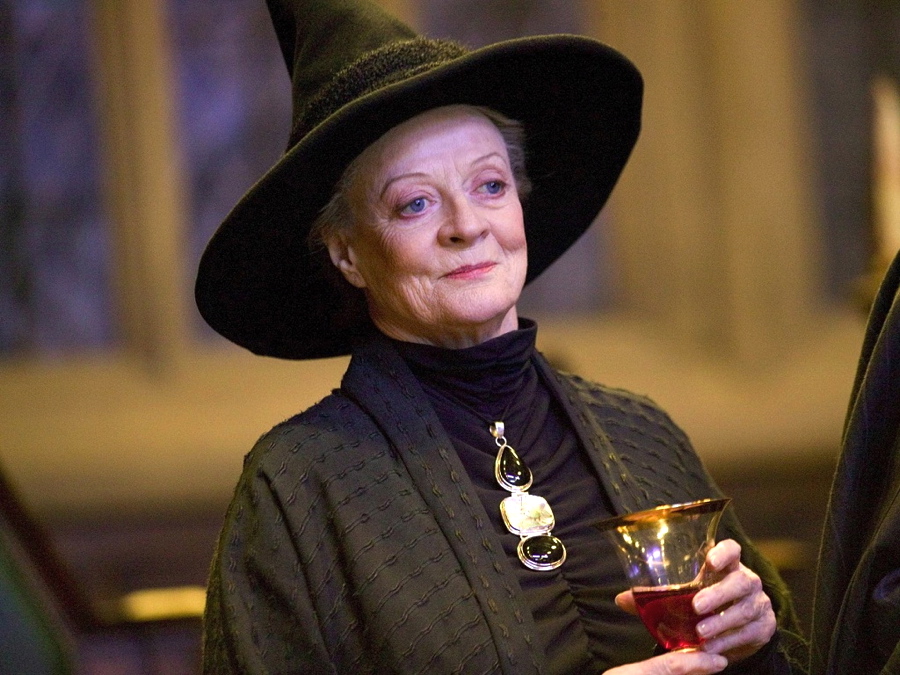 Do you give out candy for Halloween?

We have, "forever".    But there are no more children in our neighborhood.  There is a small woods, across from the houses, on this street.  Which we love, but which makes it very, very dark at night. 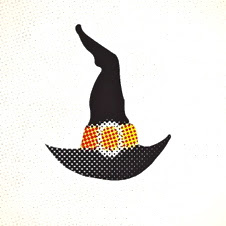 Kids from the local college used to get dressed up with made-by-them costumes, and it was cute.  But some of the college 'kids' have vandalized our yard, in the past.    And I just don't like opening my door, to unknown 'big' people, anymore.

So, nope, we are not having lights on or answering the door.  I hope you still have little kids, ringing your doorbell.
🎃 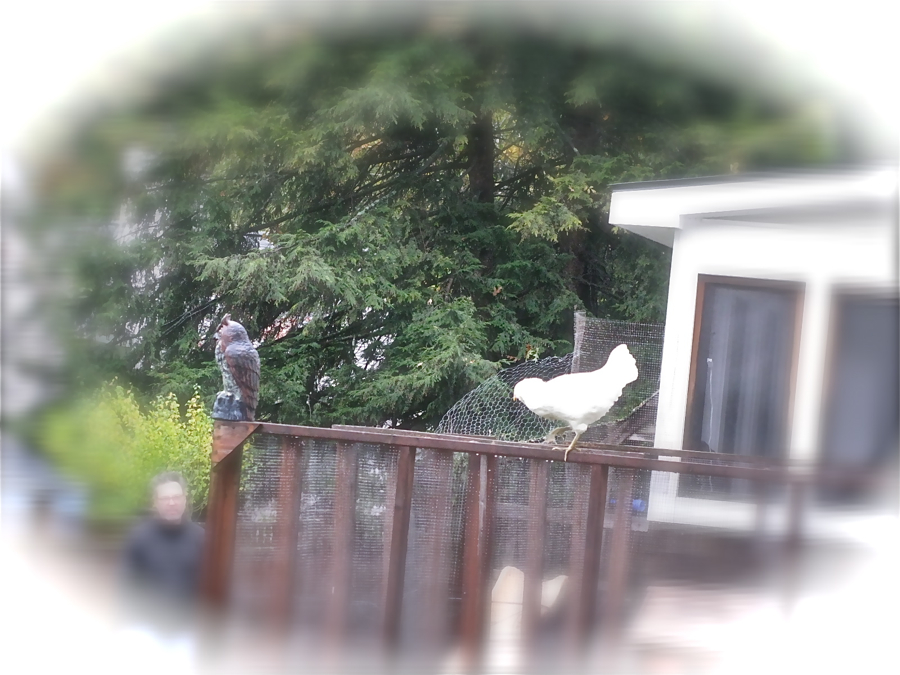 The younger chickens have now had enough of one of their wing feathers clipped, that they can not fly over the backyard fence.

This morning, their coop door had not yet been opened, letting them out into the yard and garden area.    So "Blondie" above, who still can 'hop/fly' to the top of the coop, to the high coop fence, did.   And then was stuck there!  LOL 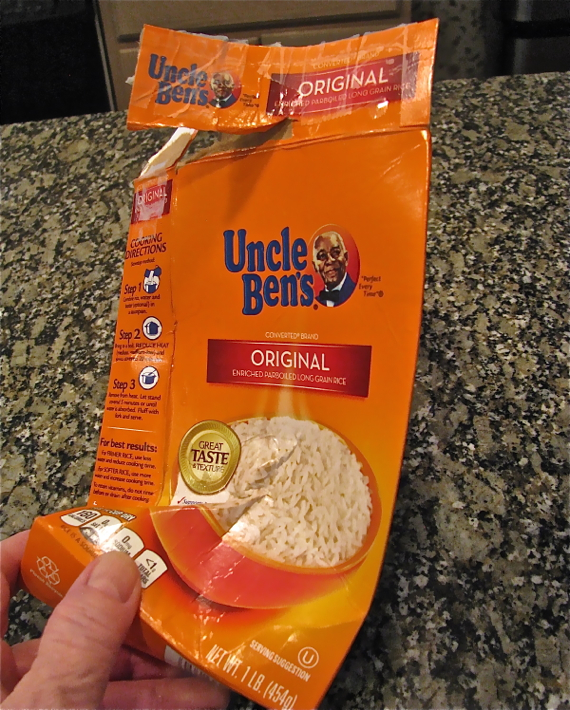 Recently I finished my box of "Uncle Ben's" rice.   As everyone knows,  this name and picture are no longer on this rice.   It is now called "Ben's".  ~~~~~    I suppose I should have saved it, and sold it on Ebay.   These will be collectable, as they are no longer being made.  😏
🍁
🍁
🍁
"O Autumn, laden with fruit, and stained
With the blood of the grape, pass not, but sit
Beneath my shady roof; there thou may'st rest,
And tune thy jolly voice to my fresh pipe;
And all the daughters of the year shall dance!
Sing now the lusty song of fruit and flowers."
~William Blake, To Autumn, 1783
🍁
🍁
🍁
🍁

Loved Maggie Smith in Downton Abbey! We haven't passed out candy on Halloween for years. Just not enough kids and we ended up eating the candy ourselves! Now we go trick or treating with the grandsons every year!

In the last three years we haven't had many trick or treaters so we have decided this year not to give out candy. It makes me a little sad as we both always dressed up a bit and had fun doing it. One year my husband was especially scary and a four year old was visibly shaken. (His reaction was priceless)

So Uncle Bens rice was one of the casualties too? I hadn't heard that one. That entire situation just infuriates me.

I hope you have a lovely day. It was 80 here yesterday and VERY windy. Storms rolled through last night bringing a cold front. A number of tornadoes were too close for comfort but we had no damage thankfully.

We are tucked on a dead end road in the woods so no trick or treaters. Husband and I dress up and trick or treat with our grand. The college kids here use to have trick or treating in the dorms years ago it was fun each kid decorated their doors so the kids loved it. But they haven't done that in years.
Cathy

We live in an older community so we won't have any trick or treaters but as a child, it sure was fun to go around the neighborhood. My Mother always dressed up too!

At Home In New Zealand said...

Chickens have great personalities, they are as individual as us and make lovely pets. Love William Blake's poem.
Halloween is a relatively new 'holiday' here and is heavily commercialized. Our family has never really picked it up, so it comes and goes without any input from us.
Have a great day :)

I haven't noticed the new rice name. But I do know that this brand has less arsenic in it than most. We do get a few little ones for Trick-Or-Traeat, plus our grandkids. Our street has NO streetlights, so it is pitch black!

I love Maggie Smith in anything - think she's great.
Too remote where we live to have trick or treaters.
I just looked on my rice box and it still is Uncle Ben's.

She's one of my favorites too!!!
We have a few small kids, but most have now grown up & these days there are "safe havens" established for kids...a good thing.

That's my favorite witch too!
I liked Uncle Ben's, sorry to see more political correctness.
We live in the country and no one seems to come to us for trick or treating.

My Piece of Earth said...

We live on a dark street where most of the residents are either elderly or university students, so no trick or treaters.

What a wonderful way to celebrate Halloween! Looks like a lot of fun.

Carla from The River said...

We will have our light on and jack o lanterns flickering for the Trick or Treat fun. We live in a small village, we thankfully have a nice neighborhood as of today. Praying it stays that way, we have been blessed.
Last year we had 14 kids stop in for trick or treat. ;-)

We will hand out treats to the neighbourhood children who come by. And to the grands whose parents will drive by with them. I love seeing kids in their costumes. So cute.

No kiddies come here! I always have something ready just in case. I hate it that they took Uncle Ben and Aunt Jemima off of the boxfronts. Stupid!!!

We don't celebrate Halloween here but I sure would love to experience the fun of it.

Despite our neighborhood being large and quiet and totally safe, we NEVER get a trick or treater. NEVER. I mean, I may be able to think of one or two times someone has rung our bell on Halloween, but it was over ten years ago and probably longer. I don't understand it but of course I'm not about to buy a bunch of candy for kids who don't show up, and then have to eat it all! I grieve for our America that had Uncle Ben on the rice and Aunt Jemima on the syrup and the Indian girl on the Land O Lakes butter. No one ever meant anything racist or rude by those logos. They were friendly and familiar, part of our heritage and history. It's sad that they're gone. xoxo